About an hour and a half northwest of Santiago is the town of Llay Llay. Somewhere in this small town, surrounded by a grove of avocado trees is the Quintessence Alpaca Farm.
Why'd we go to an alpaca farm? Two reasons:
1. My mom loves to knit and wanted to buy some alpaca yarn.
2. Alpacas are awesome.
In case you were wondering, there are two types of alpacas, huacaya and suri. The difference between the two is the type of wool they produce. The wool of a huacaya is similar to that of a sheep, while the wool of a suri is longer and more mop-like. (Alpaca Fun Fact #1: Suri alpacas are named after the daughter of Tom Cruise and Katie Holmes.)
While at the farm, I took over 100 pictures. So it was quite a challenge to narrow it down to the pictures you see here.
I didn't count, but if I had to guess the farm had around 100 alpacas. They are separated by age, gender and size.

Alpaca Fun Fact #2: Alpacas are shorn once a year. They produce fibers in more natural colors than any other animal.


Alpaca Fun Fact #3: Alpacas eat hay and grass. They have a stomach with three chambers, similar to a cow's.

Alpaca Fun Fact #4: Alpacas are members of the Camelid family. Other members include llamas, vicuñas, and camels.

Alpaca Fun Fact #5: Baby alpacas wear these snazzy outfits for about two months after they are born to help them stay warm.

The quality isn't spectacular, but here's a video of the baby alpaca running around. The baby would roll around in the grass similar to dogs. The other alpaca in the background is her mother. You can hear Maria, the owner of the farm talking with my mom and my Tio Mario. But really, just watch it to see the baby roll around in the grass.
After the tour we went into the shop so my mom could buy some yarn. I probably took just as many pictures of the yarn as I took of the alpacas. 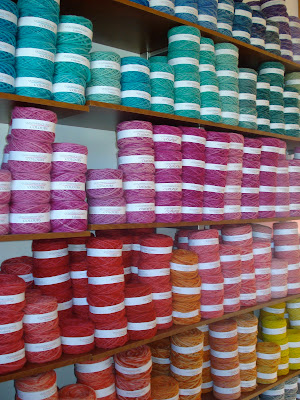 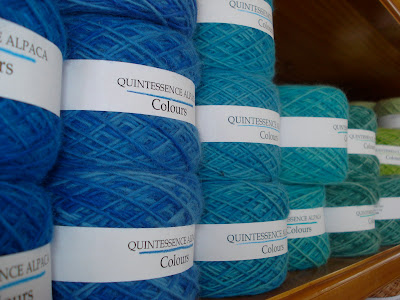 These two were my favorites:
I can't imagine the opportunity will come up too often, but if you ever have the chance to visit an alpaca farm, do it. It was seriously awesome.


Author's note: One of the Alpaca Fun Facts was made up. I'll leave it up to you to figure out which one is false.
posted by Maggie at 2:10:00 PM